A Word on Word Order: Is there any Order?

Naslov
A Word on Word Order: Is there any Order?

Sažetak
Assuming no prior grammatical knowledge, this presentation explains and illustrates the major concepts, categories, and terminology involved in the study of word order in sign languages, particularly Croatian Sign Language (HZJ). It is well-documented that sign languages have their own grammars, which may differ from the surrounding spoken languages. The basic word order in many sign languages happens to be the same as that in the surrounding spoken language, but sign languages have additional possible word orderings (Fischer 1975 ; Volterra et al. 1984 ; Bergman & Wallin 1985 ; Sutton-Spence & Woll 1998 ; Leeson 2001 ; inter alia). Word order can be defined as a set of rules based on which words, or constituents, are organized in sentences. Basic word order is pragmatically neutral or unmarked, declarative, the most frequent word order, out of context, with a predicate and two nominal arguments. In HZJ, basic word order is subject-verb-object (SVO), while other languages may have SOV or VSO as a basic word order. On account of methodology in sign language studies, basic word order is usually elicited with describing pictures in isolation. For example, HZJ sentence in (1) demonstrates basic, SVO, word order. (1) M-A-R-K-O VOLJETI A-N-A Marko love Ana “Marko loves Ana.” Apart from basic word order, there are alternative word orders influenced by several factors, that is, reversibility of arguments, type of verb, locative sentence, contrastive focus, and context. For example, sentence in (2) is SOV, as one argument is inanimate, and only one interpretation on agent/patient roles is possible. In sentence with reversible arguments, SVO order is preferred. (2) ŽENA KNJIGA ČITATI woman book read “The woman is reading the book.” Word order can also be influenced by type of verb used in a sentence. If the verb is plain, then the preferred word order is SVO, while non-plain verbs use SOV, and SVOV order. Regarding SVOV word order, two types are possible in HZJ. One is verb echo where two verbs are uninflected. In another type the second verb is inflected for iterative, or continuous aspect (3). (3) ČOVJEK PRATI AUTO PRATI++ man wash car wash++ “The man is washing the car (for a long time)”. Furthermore, SV word order is possible in isolated sentences if they contain classifier predicates, as the handshape of the classifier shows the object. In locative sentences, elicited with pictures showing objects in relation to each other, OSV and OVS word orders occurred, following the ground/figure principle. Namely, HZJ shows a preference to put the element which is larger or less mobile in first position, i.e. as the ground (4). (4) KAMION AUTO NA truck car on “The car is on the truck.” All of the aforementioned word orders were elicited as a response to individual pictures. In order to elicit more complex sentences, multiple pictures are presented to Deaf participants. When two similar pictures, but differing in one detail, were presented to participants, they produced sentences with contrastive focus combined with non-manual marking (e.g. head nod, brow raise). All three major constituents can be focused in HZJ. Example in (5) illustrates focused subject in initial position. (5) ŽENA ČITATI KNJIGA woman read book “The woman is reading a book.” Sentences connected in discourse can be elicited with a sequence of pictures telling a story. Stories signed in response to such pictures showed that HZJ employs a topic/comment structure, with possibility to omit old information, making it a pro-drop language. In this presentation we will give a brief outline of three aspects important to word order according to Bouchard & Dubuisson (1995 ; according to Leeson & Saeed, 2012): functional aspect, where the order of items provides information about the combination of words, and which provides guidance on how to interpret the sentence ; an articulatory aspect associated with simultaneity in sign languages which arises because it is impossible to articulate more than one sound at a time in spoken languages ; and the presumption of the existence of a basic word order. We will also give a short historically-based survey of research on word order in sign languages, following Woll’s (2003) identification of three important phases of research. Finally, as nothing less important, we will consider the role that data collection plays in the context of studies of word order in sign languages. Data and results are provided from word order study in HZJ (Milković, 2005 ; Milković, Bradarić-Jončić & Wilbur, 2006 ; 2007) in comparison of some available data within and across sign languages. 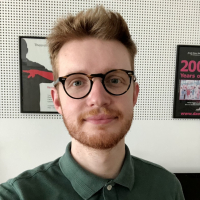